On Wednesday August 24, 2011 91-year-old Esther Gordy Edwards may have been surrounded by family and some friends when she died but certainly not all the friends this lady of Motown had. For they would have had to have a museum a thousand times bigger then the one she created for the Detroit’s recording studio she founded.

When you hear our city’s legacy it makes you wonder how all that music, all those artists, all those musicians and all those hits got cranked out of a garage ( Studio A ) of a house that has sat at 2648 West Grand Boulevard from the start, but they did. And that house would be transformed into “Hitsville USA”.

Edwards founded the Gordy Printing Company with two of her brothers in the mid-1940s and was the founder of the Motown Historical Museum. And she never ever departed her home base of Detroit. Her brother Berry as we all know literally abandoned not only the city but the artists themselves only finding out about the move from a sign that was left on the studio door.

She refused to follow her brother to the west coast instead she carefully preserved Studio A and the Motown memorabilia.

In a The Detroit News Obit Excerpt Berry Gordy Stated: “She preserved Motown memorabilia before it was memorabilia, collecting our history long before we knew we were making it,” Berry Gordy Jr. said. “She nurtured and held it together through the years, protecting the Motown legacy for generations to come — which is only one of the reasons people all over the world will remember and celebrate Esther Gordy Edwards.”

Anything Gordy could have added wouldn’t have stated what his sister represented. When he left all she wanted was this hit making house thus the “Motown Historical Museum” was created by Ester. She became what was known as a Mother figure accompanying the Motown Revue when they first went on the road in the early 1960s. She was looked upon with guidance, dignity and most of all respect.

For this younger generation of today they’ll never ever have what the artists of early Motown had. A genuine Mentor who was tough, compassionate and gave above the rest guidance between right and wrong. Most of all Esther Gordy Edwards will be remembered as Love.

The Love and hard work that was instilled from her parents, the Love she gave of her own family and the Love that spilled out from her soul that she devoted to all that were a part of what was created that would become and be recognized throughout this whole world as “The Motown Sound”.

This is the legacy of the woman who has left us but will never be forgotten for the museum she preserved for all of us who were born and raised in Detroit still stands as a Pillar to be looked upon with everlasting pride.

Her soul is now in Heaven and though we are broken-hearted she wouldn’t want us to remain that way and we won’t. Because every single time we hear a Motown record on our radio stations and wherever else they may place them, we’ll know Ester is looking down at us with a bright smile and she’ll know for her time on this earth she did good.

God Speed to her family, friends and all who knew her and what she stood for. The epitome of excellence.

I hope in her honor as they do in New York when a star dies they turn out the lights along Broadway for a moment to pay homage. Ester was our star and deserves nothing less.

Detroit can do the same along W. Grand Blvd and Downtown. 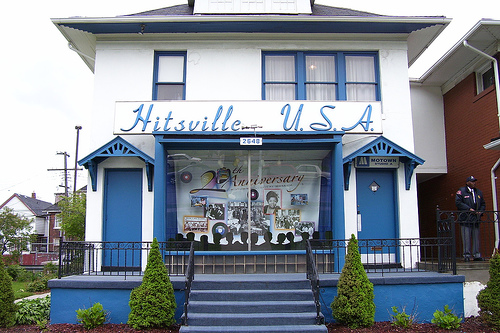 Standing In The Shadow Of Motown
The Funk Brothers

What Becomes of the Brokenhearted