WHY DO WE HAVE TO BEG TO MAKE MICHIGAN MONEY?

This is why Michigan is failing in so many realms. They have soooooo much money they don’t need NOTHING. Do You Michigan? 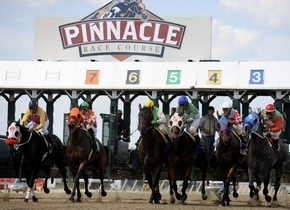 Michigan’s only thoroughbred horse racing track, Pinnacle Race Course, is in serious danger of closing after this season.

“Another year of 44 race days in this industry, in my opinion, and we will be out of business,” said Gary Tinkle, executive director of the Michigan Horsemen’s Benevolent and Protective Association. “We will not be able to survive with that number of race days.”

The New Boston track opened in 2008 and has experienced a number of setbacks spawning from the lack of race days. Its 4,000-seat grandstand and three-story clubhouse have not been built, so fans going to Pinnacle sit at tables and chairs.

Pinnacle had four days of racing per week during its 2008 and ’09 seasons but went down to two days — Saturday and Sunday — this year after the Michigan Gaming Control Board significantly cut the number of race days.

Pinnacle also offers simulcasting seven days a week, but general manager Mike Mackey said everything is in danger for 2011.

“If we don’t have live racing, we will have nothing,” he said.

After having 71 and 73 days of racing the first two years, Pinnacle is down to a projected 44 this year. Before the Racing Commission was integrated into the Gaming Control Board in January, the track expected to have 84.

By April, the number of state budgeted race days was four, so the Michigan HBPA had to use purse money to support more race days. At the start of the season, the horsemen had to allot about $6,000 in purse money per race day to pay for the state racing regulators, a number that has since climbed to $7,400, Mackey said.

The seemingly high cost for racing regulators comes because thoroughbreds require a “more robust workload” from the regulators than other horse breeds, according to Gaming Control Board executive director Rick Kalm.

Pinnacle officials are applying for 70-80 race days in 2011, Mackey said. If the state doesn’t pay to support more than two days per week, Mackey and Tinkle said racing could be done.

“Racing days and our racing opportunities are how we make our paychecks,” Tinkle said. “When those get cut, it’s like your boss saying you’ve been laid off.”

Tinkle said horsemen are losing money with just two race days per week and added that working in Michigan makes it difficult to find other racing opportunities. The closest track (Thistledown outside Cleveland) is more than a three-hour drive from Pinnacle.

Hazel Park Raceway, however, might prevent horsemen from having to relocate. The harness track is having “preliminary” discussions about bringing in thoroughbred racing, race director Ladd Biro said.

“We’re not in the healthiest state as far as racing goes and that could happen,” Biro said. “It may well come to fruition.”

Hazel Park would try not to cut back on harness race days if it decides to add thoroughbreds, a decision that would require numerous changes and new equipment since the horse breeds race on different tracks.

Biro said he thinks Hazel Park is not in danger of losing race days and this possibility is “a matter of necessity” brought on by the struggles across all breeds of horse racing.

Hazel Park was a dual-breed track from 1949 until it became harness only in 1985.

While Tinkle said adding thoroughbreds to Hazel Park could add competition for Pinnacle and give horsemen more work, Mackey wasn’t as excited about the possibility.

“It would help us in no way,” he said. “It’s a backup plan for the horsemen.”

Kalm said the board is stuck in a quagmire in regards to funding race days at Pinnacle and all other horse tracks in Michigan. The funding comes from the state’s Equine Fund, which is supported by the state’s take on wagers. Kalm said fewer race days lead to a greater depletion of the fund and make it continually more difficult to add dates.

He said the board will continue to work with horsemen and others involved in racing, but it appears unlikely that there will be more race days in 2011.

“If they don’t add or figure out a way to stabilize the Equine Fund and the Equine Fund continues to deplete, then there will be less races than there were this year,” he said.

Pinnacle had four days of racing per week during its 2008 and ’09 seasons but went down to two days — Saturday and Sunday — this year after the Michigan Gaming Control Board significantly cut the number of race days. (David Coates/The Detroit News)

Why WordPress has never been on EST or for that matter American time is beyond me.