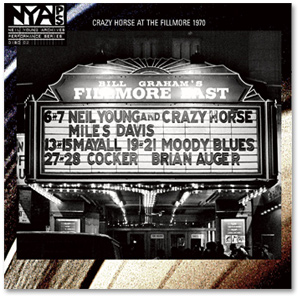 This was the first live release and last tour that featured Danny Whitten who died in 1972. The tour which included a stop in N.Y. for the Fillmore performances was to support their May 14, 1969 release of Young’s second album, ” Everybody Knows This Is Nowhere ” and was the first album being backed by Crazy Horse.

Although Whitten wrote songs, played and contributed on more of Young’s albums and recorded one album with Crazy Horse in 1971.

Addicted to heroin during the recording of 1970 album ” After The Gold Rush ” Young dismissed the whole band before the album was finished and in 1972 ultimately it was Billy Talbot and Ralph Molina who fired Whitten from Crazy Horse.

“The Needle and the Damage Done” was actually Young’s expression for Whitten’s destruction of talent caused by his drug use. In Oct. of 1972 Young contacted Whitten for the final time wanting him for rhythm guitar for the upcoming tour behind Young’s “Harvest” album but was so drugged out of it he couldn’t even cut it during rehearsals. Young fired him on Nov. 18th, gave him a plane ticket and $50 dollars to get him back to L.A.

Later that night Danny Whitten O’D on Valiums and Vodka. Another sad ending to such a talented individual.

“Down By The River” was just one of many standards that to today Young still plays at his concerts. As far as I’m concerned everything he wrote and every performance he played on, at or with whom is a standard.

In reality Crosby, Stills, Nash & Young wrote the soundtrack of my adolescence. They never wrote or performed a bad song between the four of them.

END_OF_DOCUMENT_TOKEN_TO_BE_REPLACED

Written by Neil Young
Released in 1975 off the Zuma Album

Performance on video is from Live At Rock In Rio, January 20, 2001, Rio De Janeiro, Brazil.