Mickey Rooney… An Era Of Legendary Hollywood Has Died.

Lord, what can you not say about this man and actor.

Of course I’ll always have forever etched in my mind all those Andy Hardy movies he made with Judy Garland, but there’s one in particular I have never forgotten.

I first watched this movie when I was about 6 years-old and remember crying at the scene in-which he reads a letter from his brother. At almost 57 I still remember Homer Macauley. To this day I still believe it was Rooney’s best performance ever at a young 22.

I can’t count all the movies he made in an era when an actor signed to a studio pumped out 7, 8 movies a year. All I know is with his passing you feel as if a part of your family has left.

All the words apply, Icon, Legend in reality with the acting, dancing & singing abilities Mickey Rooney was a Monument of Entertainment.

He has left this world with enough of it on film and television there would be always something on to watch. Something that a thousand cable channels can’t seem to provide. Just goes to show you what classics are all about and class acts. Mickey was on the top of the list.

93+ years of life God graced us with of this man and after God welcomed to Heaven I’m sure Judy was standing there waiting. What a grand reunion that must be taking place right now. There always smiling in one place and tears left behind, yet still these stars always remain with us forever.

There’s only one channel I need, Turner Classic Movies. It’s where they keep our happiest memories for us and put them on display. 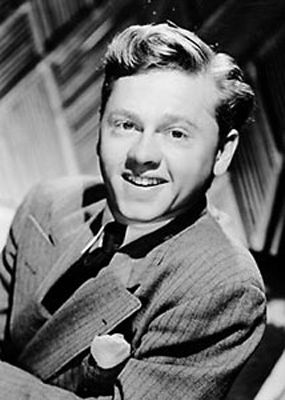