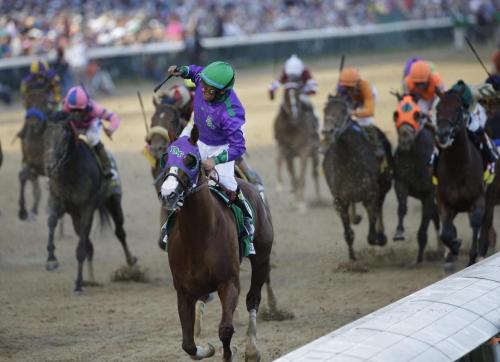 So much for four white feet being bad luck!

From out of a $8,000.00 MD bred mare named Love the Chase and a $2,500 stud fee from KY bred Lucky Pulpit came a diamond in the rough. Owners Perry Martin & Steve Coburn were called dumb ass’s for having got involved. Thus Dumb Ass’s Partners were formed and are now laughing all the way to the bank, and this retired groom couldn’t be more happier for them.

As far as that goes I’m elated that Art Sherman a 77 year-old trainer who started out in the stable area as a hot walker at 18 defeated all these well-known over-rated named trainers.

Steve Coburn gave credit to his partner stating Martin knew his bloodlines. That he did. Even though California Chrome’s momma & daddy didn’t score so big you have to look a lot further down, way way further down all the way back to War Admiral whose daddy was Man O’War. Then Northern Dancer and history of that blood line, and that was just momma’s side of the family. LOL