Witch Hunt Over Trump, You’re Got!

Michael Cohen now willing to state Trump knew about the meeting with Russians in 2016.

Well this isn’t actually some great big new revelation as Trump himself stated this on June 7, 2016 that he would shorty be sharing some great information on Clinton in a speech a few days after this meeting on June 9th. Only It Never Came. Russian broad didn’t come through with the dirt. Of course he knew about the meeting, only now his precious former fixer will tell he knew putting it formally on the record. That’s the only breaking news here, we knew this two years ago. Trump himself said it. News media isn’t his enemy, he is his own worst enemy. He tells on himself.

I’ll get you my pretty…. and hopefully more as in Pence aka Judas. Evangelical hypocrite.

The Witch is Alive, his name is Donald Trump. 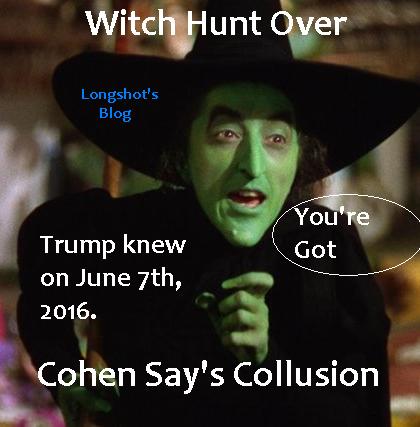 He begged for espionage when he asked the Russians to hack Clinton. He even licked Putin’s ass in Helsinki taking his side on everything while kicking the USA in the gut.

Well for those that served fighting for America in World Wars, he should have known. We Kick Back.

Now it is our turn you fucking traitor.  So Prepare to die!

A Disgrace to America