Where was the USA Representation in France’s Soladarity Rally Sunday?

When you can get Israeli Prime Minister Benjamin Netanyahu and the President of the Palestinian Authority Mahmoud Abbas to attend and march in unity with all the bad blood between the two at war with each other, joining 50 world leaders along with millions of people. I can’t be the only one asking where in the hell was President Obama? 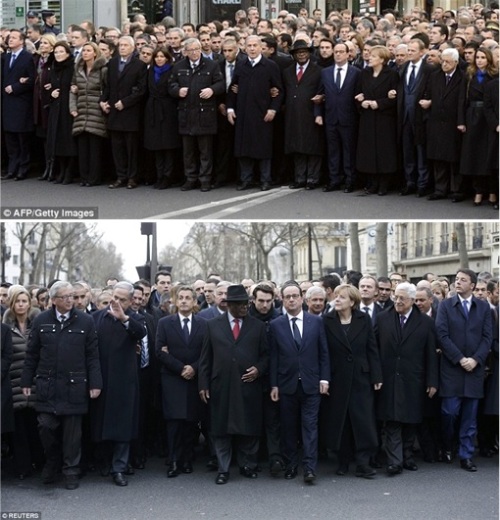 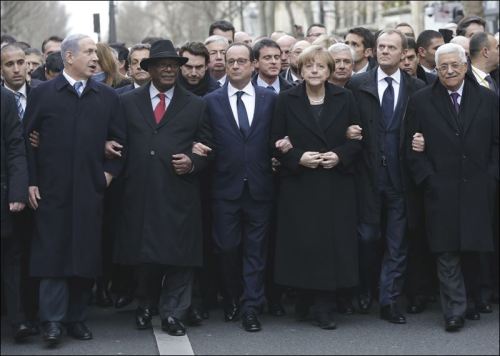 Ukrainian President Petro Poroshenko and Russian Foreign Affairs Minister Sergei Lavrov. One obviously knows the history between these two countries as well, but they were there. 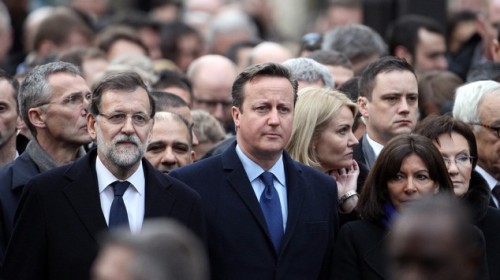 My God, Attorney General Eric Holder was there for a meeting and he wouldn’t even join in the march with the other heads of State. The lone person? Ambassador to France Jane Hartley and who would know of her?

If Pres. Obama was too scared to go he could have asked Bill Clinton to go and represent our country, in-fact I wish he and Hillary Clinton would have just gone. Though most dignitary’s I’m sure had their own countries government planes and security forces take them.

Watching this massive and I mean beyond massive rally with Millions was a spectacle to see. Such an awesome display of perseverance, peace, the warmth of all the different people unifying for one cause. To show the terrorists you will not silence us, we will not stop life as we know it. Freedom, Liberté.

There were tears and there was a celebration for the lives of Charlie Hebdo, the Jewish store and the Police.

As I flipped between the two media stations BBC & CNN I listened to all who were being interviewed, stories, the inter-twining of all the lives there. A Muslim women wearing a sign I am a Jew was the most powerful. JU Suis “I AM” and all were saying I am this other person, we all are one. You couldn’t help but being touched yet still of all the different country flags waving I never saw our own and I was angered.

I taped hours and hours of coverage from both BBC & CNN and I never saw the American flag once, nowhere, not in any single shot and I felt ashamed. 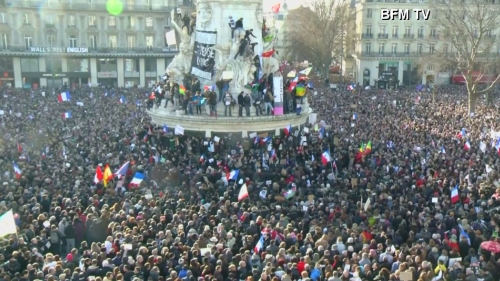 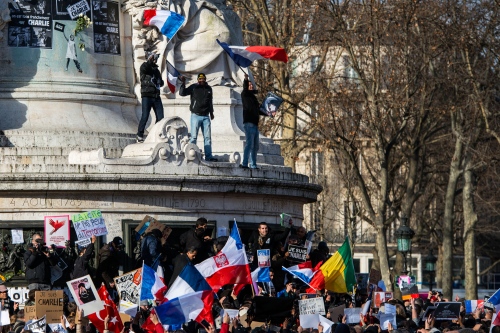 Here France is our closet ally in ideology and the fact that both gained liberty almost at the same time. La Liberté éclairant le monde, aka the Statue of Liberty a gift from France.

Yet we were absent Sunday, what was our President thinking? A man I voted for, I’m outraged. Was anybody in Washington thinking?

Did anybody need this president’s permission? I know Bill Clinton would have gladly gone.

I don’t understand. How can 50 world leaders attend such a meaningful event in history and the USA doesn’t show up.

Our politicians go on and on how now to let the terrorists interrupt every day life, Obama just blew off at a movie studio for caving in to N. Korea’s threat but he left a gigantic hole in that line of leaders. The absence a slap in the face to not only France but to all of us Americans who watched Sunday proud for the world that gathered to show their solidarity for such a tragic event that had taken place.

An opportunity missed to show how strong we are as a nation and that we will stand together with those who suffered the same type of tragedy we endured 14 years ago.

We missed the boat and the world watched us being MIA.

I’m a proud American, a proud Democrat, I still am but the respect I have for my president got flushed down the toilet Sunday. No republican questioned why we weren’t going either, nobody at all within or government spoke up at all and the lot of them should hang their heads in shame.

Again I will state, When you can get Israeli Prime Minister Benjamin Netanyahu and the President of the Palestinian Authority Mahmoud Abbas to attend and march in unity yet the United States Of America doesn’t show up to support and also march and stand with our oldest and closest ally, there is something very wrong.

I hope to God, they know that very noticeable absence from our so-called leaders doesn’t represent the American Citizens.

We stand with you! We love you! Vive la France! 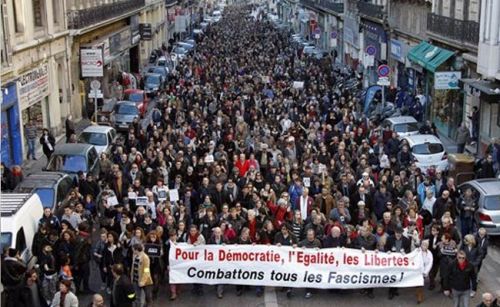 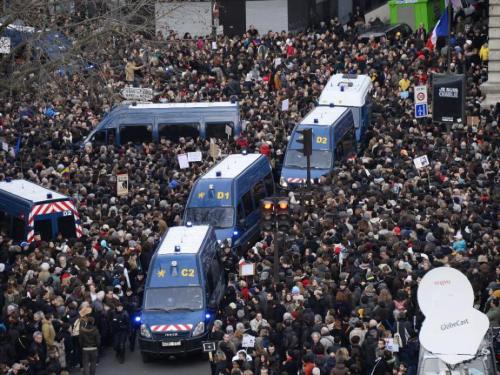 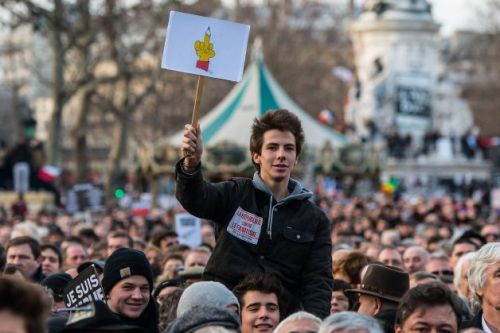 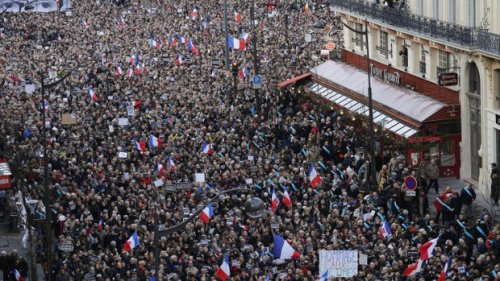 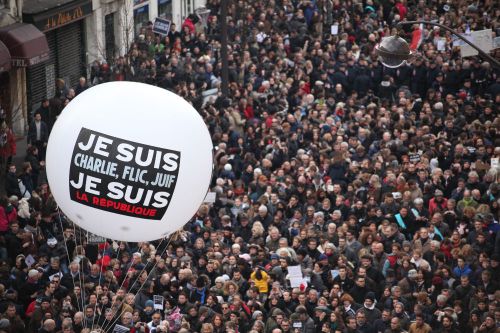 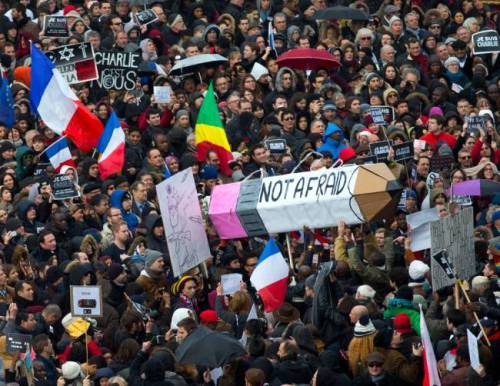 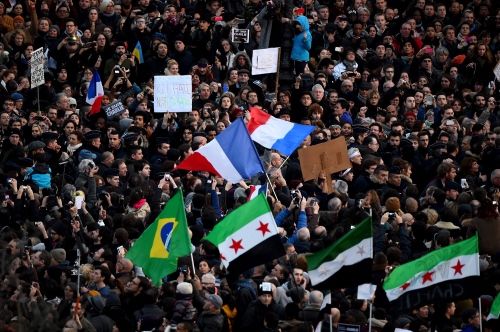 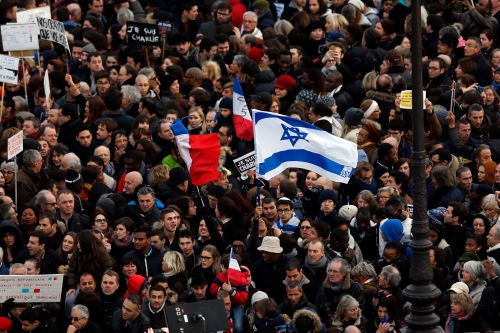 (Click onto twice for full resolution, a lot of pics.)

Still Rallying into the night. 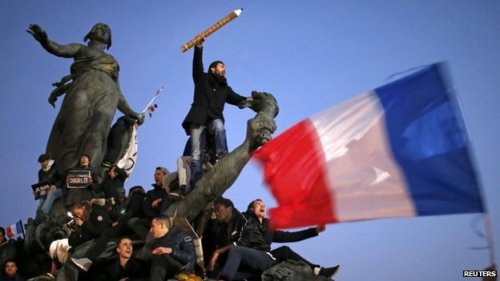 France Strong… May God have those lost in these terrorists attacks in Heaven and May God Bless France and keep all of us safe from this happening again anywhere.

Where were you President Obama? I just shake my head. 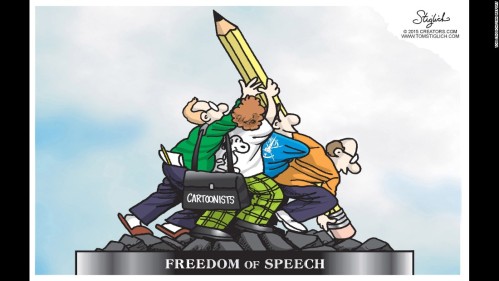