Sunday Smooth Soul’ ~ “Stay In My Corner” ~ The Dells

Outside of Detroit’s own Levi Stubbs of The Four Tops, Marvin Junior’s almost as smooth baritone vocals made this 1965 release soothing to everybody’s soul. His 17 second note holding on the one word “BaaaaaaaaaaaaaaaaaaaaaaaaaaaaaBY” made both females cringe and had the males in awe. The 65′ release of this record hit #3 on the R&B Hot Black Singles chart, its re-release in 1968 hit #10 on billboard 100.

Something these young rappers should pay some attention to. When there was a time when men had respect for and sung love to women instead of words talking obscenities and insults at them.

And when the women had respect enough for themselves by excepting nothing more and settling for nothing less. We all need to go back to a better time.

All I know that if Marvin Junior had been singing this to me, oh baby you better believe I would have stayed.

This was the day of real R&B. 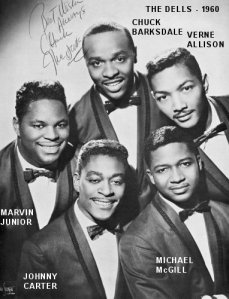