As I’ve said in another blog posted about these guys a while back, in my opinion LLB still have never received the recognition they honestly not only deserve but have earned. In another time period they would of been a house hold name in the Rock and Blues Music World.

For some reason most people never could seem to disassociate them from their first hit single “Heaven” when they are about so much more.

Henry Garza’s playing is as good as any notable guitar player that has come from out of the past. Only these artists are here at present and with brothers Jojo & Ringo exceptional players in their own right have given, represented and have helped preserve the blues in this present day in age.

Hector Galán an Independent film maker started filming his documentary (the same song name) on this band in 2002. In 2006 it premiered at the SXSW Film and Music Festival in Austin, Texas not far (San Angelo, Texas) from where the Garza’s are from. The DVD of the Doc. was released in 2008.

I posted “Onda” on Nov. 1, 2010 as Jam of the Week. That performance totally blew me away. And I couldn’t add anymore to what I’ve already expressed about this group contained in that blog. Los Lonely Boys are phenomenal in so many ways yet for some unknown reason to their die hard fans, I feel Epic Records has not done these guys justice in their marketing of the group.

They are all that and more. Blues at its finest and they do it with honesty in its rawest and purest form. And they should be bigger than what they are.

If you don’t have the Blues, Catch Them… Because you’ll never look back. 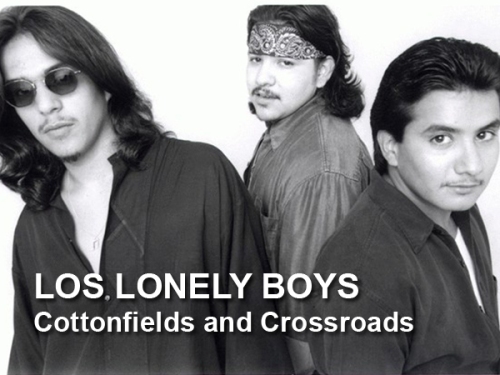