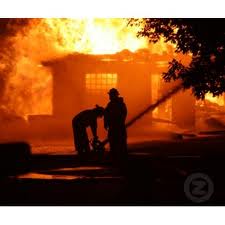 Flames from the fire shot 100 feet into the air, witnesses said.

One man is injured and 27 horses are dead after an overnight fire in Jackson County. Original reports indicated 38 horses were killed, but the Grass Lakes Fire Department has confirmed the total is 27.

Fire officials say the flames broke out at about 10:30 p.m. Tuesday at Campbell Stables. That’s on the 1600 block of Hayball Road in Grass Lake Township.

When officials arrived the two-story barn was fully engulfed. Firefighters from 5 area departments came to fight the blaze. After four hours of battling the flames, officials determined the barn a total loss.

“I’m crying for them too. It’s not easy to lose a horse. They’re actually a part of your family,” said Linda Buckner-Dinco, neighbor.

In injured man apparently tried to save the horses but was burned in the process.

He was taken to a hospital at the University of Michigan with burns on his hands and legs.

The fire does not appear to be suspicious. The cause of the fire is still under investigation.

The Campbell’s Farm does offer horse boarding. No word on whether any of the horses that died belong to someone else.

A barn fire at Campbell Stables in Grass Lake, Michigan on Tuesday night killed at least 25 horses and injured one person, who suffered minor burns trying to save the horses.

One of the state’s leading breeders, Campbell Stables is owned by Jerry and Lisa Campbell, founders of Pinnacle Race Course in southern Detroit, which closed in late 2010.

Firefighters were called to the southeastern Michigan farm at about 10:40 p.m. EST to find the two-story building fully engulfed in flames. The cause of the fire is under investigation, but authorities say it is not being considered suspicious.

The fire claimed the farm’s entire string of yearlings, two-year-olds, and all three of its sires. The broodmare band is kept in a separate barn and was unharmed.

Among the stallions lost in the fire was Fire Blitz, a 13-year-old son of Storm Cat, out of 2000 Canadian Broodmare of the Year Primarily. He was a half brother to Sovereign Award winners Primaly and Poetically, Grade 1 winner Citronnade, and influential Canadian sire Whiskey Wisdom. He sired two Michigan-bred stakes winners in his first two crops to race.

“Their stallions were young, and they were just starting to produce, and they looked like they were going to be pretty nice horses,” said Patti Dickinson, president of the Michigan Thoroughbred Owners and Breeders Association. “They had a lot of Kentucky and Canadian-breds by horses like Milwaukee Brew, Alphabet Soup, and Rockport Harbor.”

The farm worker, who lived in an apartment in the barn and attempted to save the horses, was taken to an Ann Arbor hospital with burns to his hands and legs. Dickinson said members of Grass Lake Township have found a temporary place for him and his family to stay rent-free until they can find another residence.

The fire chief added that it took 25-30 firefighters around three hours to get the blaze under control.

He expects the investigation to last about a week. “As soon as the insurance company gets involved, they’ll send their people out,” he explained.

According to the Jackson Citizen Patriot, the Feb. 21 fire wasn’t considered suspicious. There were two other barns on the property that were undamaged, as well as the Campbell’s home, which is located to the south of the burned barn. 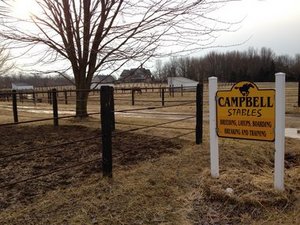 There has been many articles written on this blog site by me but it is with great sadness where there would be circumstances in-which this one would have to be written.

Most addressing the continuous turmoil that the State Of Michigan has caused the Horse Racing Industry here. And I never pull any punches on any of my blogs. I’ve stood up for Jerry Campbell when I felt he was very unfairly being attacked by those in the media with their atrocious reporting on the real state of affairs that’s going on here. And I’ve also lashed out at the Campbell’s when I thought they were taking total advantage of their fellow horsemen/women when it came to paying PRC’s bills.

My last blog was rage over the announcement that Campbell’s money would be the backing of a new Casino in Lansing when Pinnacle sits abandoned. Michigan itself is the only and main culprit to what has happened to the very Industry that supported and was a revenue generator at one time to the tune of $400 Million dollar Industry for Michigan long before the word Lottery or Casino was ever heard in this State.

Yet our industry has been thrown to the wolves and discarded as if these 12,000 livelihoods (at one time 42,000) who directly and indirectly connected to Horse racing were absolutely nothing at all.

But this news today of the loss of 27 Horses lives in this manner, a raging fire has torn a hole in my heart and soul. It has just plain sickened me. Some people place a money value and price tag on these animals as if this were the only thing that mattered. How much were they worth in monetary value. These were living breathing heart blood pumping beautiful horses. They feel every single emotion a human feels. Joy, pain, fear, despair.

I had a dear friend (now deceased) who lost horses in this manner. Owner and Trainer Bonnie Sutherland. I worked for Bonnie as a groom, the reality I will always refer to her as not only a friend but my professor. Somebody set her bottom barn on fire purposely. As I watched the 11:00 pm news that night years ago and listened as they said a farm in Lapeer that was across a volunteer fire dept. my heart sank. It took 15 tries attempting to dial her phone number with my hands shaking so bad I thought I’d explode. When she answered I didn’t need to ask was it her farm. Her voice was so hoarse, worn, stressed and burnt out all I could do is cry.

The horses that died all had broken legs from the kicking and the ones that were up in the top barn unhurt wouldn’t eat for days because they looked for their buddies that they were turned out with every single day were gone. Yes Horses know despair and depression. They heard their screams that night as well and were helpless to rescue them.

That image never left Bonnie’s mind nor will it ever leave those who witnessed this at the Campbell’s farm. My heart goes out to Lisa who I know from several correspondences today was there completely frantic and screaming. I can only imagine her pain along with all those with her watching helplessly. Like the fire that consumed the barn at Charlestown, Va. race track last year that I wrote on. The screams then the silence knowing never ever leaves you. One can only pray it eases up with time.

As I read in Joe Nevills article in this fire among the other horses it took all the babies (yearlings and two-year olds in layman’s terms) and I found myself breaking down as I continued to read on as if I could vision this entire horror story play out before my eyes. It’s bad enough reading about it and knowing the people involved it’s another to have been there first hand to witness and experience it.

The article didn’t say which worker who was hurt during the upcoming hours I’m sure I’ll be told. I know Patrick White ( his dad was the first trainer I ever worked for ) & Wayne Barnett worked at the Campbell’s. I’m sure there were others we all knew.

Look people, this Thoroughbred family of ours is like most. We fight, argue, get along, stand up for each other when others are attacking us and we feel unless you are apart of this family you don’t have the right. We may have but you don’t.

Whatever blogs I have written on, they are done so with truth with facts to back up my words. And right now that hasn’t got thing one to do with the tragedy that occurred last night at Jerry and Lisa Campbell’s farm.

At the track one may dislike anybody to the point of wanting to slam their heads into a cement wall, at DRC their were plenty of them. But one thing about this crazy bunch that work their asses off 7 days a week from sun up to beyond sun down. When a horse got into trouble and somebody yelled help peoples worst enemies came running to help. Once that horse was out of trouble people still parted the same way. But they were there for THE HORSE.

I only wish that I along with a hundred more could have been at the Campbell’s to rescue all of those horses who sadly perished in my mind in one of the worst scenarios.

No words can possibly ease what the people involved went through Tuesday night. But please know that there are many many people whose hearts are heavy with you with this horrible news and may you also know we have you in our prayers, thoughts and hearts. I hurt for you, I cry for those helpless horses. I pray to God – that when they left this earth they were running free, happy and without pain in Heaven.

I am deeply saddened and sorry for this loss for it is too much to bare.

May something, anything ease your pain.