Kentucky Downs Racetrack gets approval to add 75 more Instant Racing Machines as the money flies in. 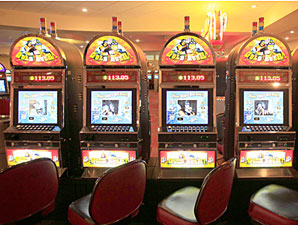 With wagering on Instant Racing growing each month, Kentucky Downs racetrack has received approval to add 75 more electronic games to the 200 that have been in use since Sept. 1.

The Kentucky Horse Racing Commission voted unanimously Feb. 15 to approve the expansion of Instant Racing at the Franklin, Ky., track. Twenty of the machines approved by the commission have already gone into use after the premises were inspected by KHRC staff; the additional 55 machines will be installed once they have been received from the manufacturer.

The machines have been placed in use in Kentucky based on advisory opinions that the wagers are pari-mutuel because they are based on the results of previously run horse races in which the Instant Racing bettor does not know the outcome in advance. However, the legal status of the machines has been challenged in court.

Corey Johnsen, president of Kentucky Downs, said wagering on Instant Racing, officially called historic racing due to the nature of the gaming, has increased each month since the machines began operating. As a result, the track, Kentucky horsemen, breeders, and the state’s General Fund have benefitted handsomely from the new gaming.

“Our business has been very good,” Johnsen said. “These are some very exciting times.”

Johnsen said the track has retained Nick Hughes, a veteran casino executive with the Hyatt Corporation, as a senior vice president to oversee the Instant Gaming operations. He said Hughes is also an investor in Kentucky Downs.

According to a financial breakdown provided during the commission meeting, from Sept. 1, 2011 through Jan. 31 of this year, $40.2 million was wagered on Instant Racing at Kentucky Downs.

Also during the meeting, the commission approved the transfer of 5% interest in Kentucky Downs to Churchill Downs. Churchill, which now owns 10% of Kentucky Downs, purchased the interest previously held by Brad Kelley’s Bluegrass Hall LLC.

During the regular business session at the meeting, the state veterinarian reported that during 40 days of racing at Turfway Park from Dec. 1, 2011-Feb. 5, there had been only one fatality over the Polytrack artificial surface.

Well all I can say is wait until the rest of the tracks in KY have these machines installed, up and running. The money in revenue it generates to both the Horse Racing Industry but as importantly to the State will exceed a hell of a lot more than hundreds of thousands. It will be more like as in $$$Millions.

But again Michigan doesn’t need any extra revenue do we Governor Snyder? We are flooded with money and jobs.

In a few months Ohio Casinos will be open and with no more buses bringing people from that state into ours, somebody better a Re-Invent something here in Michigan. Casinos here will take a hit thus the state will too. But if somebody would come to their senses and realize that if the states horse racing tracks could get these same machines as KY or better yet slots. That in itself will more than make up for our loss when Ohio no longer needs to transport their patrons here.

You save the horse racing industry that employs 20,000 jobs and you pull in one hell of a lot of money in the process.

As I’ve said in the past a hundred times, nothing but a Win-Win situation for all.

Now you have to understand something here. It was The Kentucky Horse Racing Commission that voted unanimously Feb. 15 to approve the expansion of Instant Racing at the Franklin, Ky., track.

Here in Michigan our Office of Racing Commisioner was dissolved in 2009 and our Horse Racing Industry here was taken from its governing body of Agriculture and thrown under the Gaming Control Board. Something to a lot of us here needs to be rectified. The commercial Casinos here do not employ 20,000 people but the horse racing industry directly and indirectly does. Michigan threw us under gaming yet there is not one single thing at any race track here that resembles what could be defined as Gaming.

And that is long overdue. About time this state steps into the 21st century. This Governor touts re-invention when some things here have never been yet created or invented. Senseless and its costing us livelihoods and much needed revenue. Time for some re-examination of things here Governor.

Time to reinstate our ORC and put Horse racing on an even playing feild here like other states have done and are also about to do.

The New Hampshire House of Representatives will take up expanded gambling when a full vote on HB593 comes to the floor Feb. 8 and passage could bring the return of live Thoroughbred racing one step closer. Rockingham Park, which has not held a live Thoroughbred meet since 2002, is considered the front-runner to be awarded a casino license if New Hampshire becomes the 42nd state to expand gambling.

Millennium Gaming of Las Vegas holds an option to buy the track if expanded gambling is legalized and has planned a $450 million renovation of the facility that held its first live meet in 1906 and is one of the oldest Thoroughbred tracks in the country.

“Millennium believes a revitalized Rockingham Park includes bringing back the Thoroughbreds. It is what they and the community wants,” said Millenium spokesman Rich Killion.

There has not been live horse racing of any breed in New Hampshire since 2009.

For the past two decades, the House has consistently killed every bill advanced but now competition from neighboring Massachusetts is said to have changed the hearts and minds of some legislators who were staunchly opposed.

In the fall of 2011, Massachusetts legalized expanded gambling and is now authorized to construct three destination resort casinos and one stand alone slots parlor. According to a study recently released by the New Hampshire Center for Public Policy, the Granite State will see a revenue increase of $114 to $175 million if gambling is expanded but would absorb 75% of the private and social costs if it did nothing and its residents crossed the border to gamble in Massachusetts. Over 2,000 jobs are expected to be created by the casinos.

The State Lottery Commission has predicted that its sales would decline by 5% to 7 % if New Hampshire does not allow casinos and its residents gamble out of state.

HB593, which would allow up to two full casinos in the state, was recommended for passage 14-7 by the Ways and Means Committee last year. That vote is significant and historic because it was the first time a gambling bill received positive support. Nonetheless, Gov.John Lynch (D) has promised to veto any expanded gambling legislation that comes to his desk and there would need to be enough votes in both the House and Senate to override that action. The four-time governor is retiring at the end of this term.

The New Hampshire Senate has delayed action on its version of an expanded gambling bill as it monitors what happens with HB593.

Another Governor who doesn’t get a neighboring state is about to consume them. Hopefully they get the votes now in the house along with the senate. Either way that Gov. is out of there and that can’t come soon enough.

How nice it would be for Rockingham Park and the Thoroughbred Industry and its Horsemen there to come back to life.