Hard Luck Blues was Roy Brown’s biggest seller in 1950 but it wasn’t his first song he wrote or recorded.

Roy Brown & His Mighty Mighty Men with The Griffin Brothers.

If you honestly want to know who, how and when Rock-n-Roll was being created I invite you to look up this mans life story.

“Good Rocking Tonight” was written, recorded and released in 1947. It hit number 11 on the R&B charts. You see Blacks didn’t hit the U.S. Pop charts for the Genre they invented, instead a whole lot of white folks received all the glory for it.

It was Wynonie Harris who turned down Brown’s “Good Rocking Tonight” so he went to another blues singer Cecil Gant and him being no fool got on the phone to the president of De Luxe Records. Jules Braun at 4:00AM in the morning listened to Brown sing it and was immediately signed to a contract. Harris then covered the song that same year and later on Elvis Presley covered it in 1954.

But Rock-n-Roll had already been created long before Elvis. But make no mistake Elvis always paid homage to the people this music originated from. Others on the other hand acted as if they did.

The Lyrics, Muse, the Mood. Blues was contagious and I was glad I had become inflicted with it.

For this De Luxe session and song The Griffin brothers were asked to play, Jimmy on trombone, Buddy on piano.

Roy Brown blasted into music in 1947, sadly by 1959 he blasted out of it. Later on in his career he sued King Records (who bought out De Luxe) over royalties and was blacklisted for it. He was much sinned against. His total talent. A man stripped from that talent solely because all he wanted what was due to him. He wrote and sang the songs but the record companies wanted to keep all the money from the talent who created it.

In the early 1960s because of so little work to be found Roy Brown sold the rights to ” Good Rocking Tonight” but make no mistake…It Was His.

He was posthumously inducted into the Blues Hall of Fame the same year.

This man was the Birth of Rock-n-Roll but disheartenedly discarded.

The Music he helped to create Lives On. 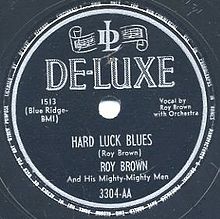 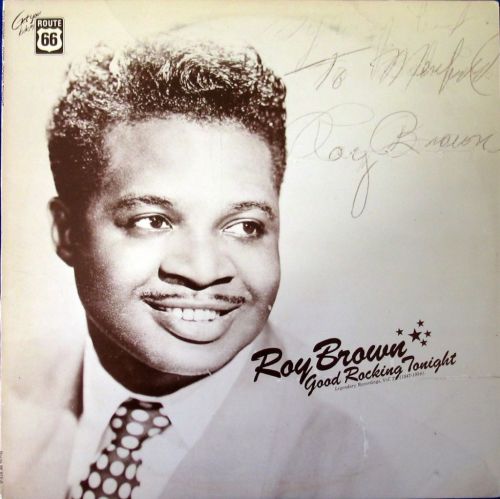