The 2012 racing application for Pinnacle has been withdrawn.

Larry Julian on October 5, 2011 advised the MGCB that circumstances beyond his control have made impossible to meet deadlines. Larry expressed his appreciation to HBPA for their support and cooperation received from MGCB while he attempted to meet application requirements. Larry went on to say ” I remain positive that Pinnacle will again be a premier racing facility with additional gaming and remain optimistic in its future”.

And the saddening and more than sickening situation that affects all Thoroughbred Horsemen/Women continues on. As I’ve wrote a hundred blogs already that seem to be reiterated time and time again. Michigan has set the stage for the complete death of Horse Racing here. The only reason Mount Pleasant Meadows raced this year is because of the HBPA and its T.B. Horsemen. The only reason the Harness continues to exist is solely the Thoroughbred Racing Simulcast Signal otherwise their doors would be closed as well.

Who wants to invest another dime into a lost cause here. Jack Krasula has said enough. Can you blame him?

This all started in 2009 when then Gov. Jennifer Granholm cut 101 days of live racing at the state’s five tracks for 2009 then dissolved the Office of Racing Commissioner altogether. Her order that year trimming the office’s $3.8 million budget by $1.4 million as part of her effort to cut state expenses was a slap in the very industry that held up the state she became governor of. She was clueless.

Did she realize the jobs connected to Horse Racing in general. Not only from the standpoint of the Horsemen and Women themselves and all of its workers but the ones at the farms throughout the state. She started the slaughter of agriculture as we knew it. And her successor is as clueless as her. He parades on this Jobs rant to the point of going to China trying to bring some new ones here, but refuses to even attempt to save the 12,000 connected to the horse racing industry already here but just a moment away from extinction for good.

Well I’ll tell you Jerry Campbell may still be a bank mogul as this Florida article depicts but he has made some pretty stupid decisions where the race track he built here. Anybody who can brag on banking success yet refused to pay his bills to continue simulcasting at PRC I personally find all of this enough to make one puke. 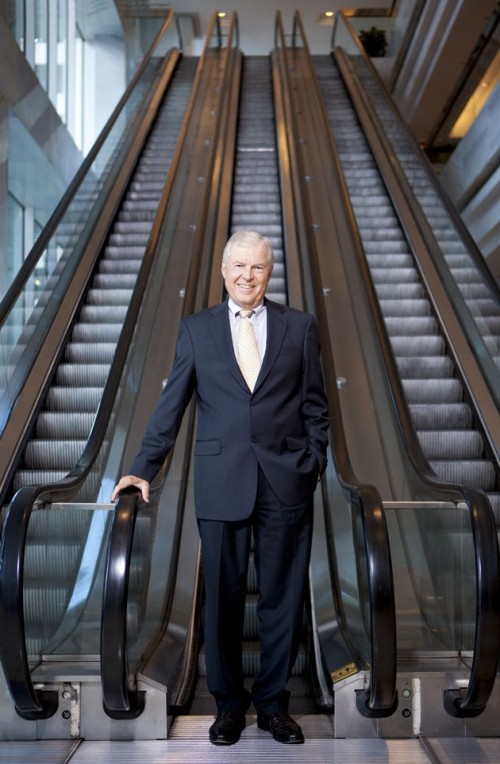 He’s looking for his partner to keep investing his money and others but he looks like he’s doing pretty well off in the sunshine state.

Now in the midst of building his second career bank, Jerry Campbell is finding plenty of opportunity in Florida, where bank closings so far this year are already outpacing 2009.

He isn’t cheering for more fallout. It’s just that his young financial institution is in a much better position to grow by picking up those pieces.

The chairman, president and CEO of Tampa-based HomeBancorp Inc. finalized the purchase agreement of two Pinellas County branches from Houston-based Encore Bank, along with at least $50 million in deposits, earlier in June. The Belleair Bluffs branch was consolidated with an existing HomeBanc office right across the street, while the other in Clearwater became its seventh retail office.

“We like the idea of buying offices rather than banks,” says Campbell, who launched HomeBanc in 2007 after building Republic Bank in Ann Arbor, Mich., and selling it for $1.6 billion in 2006. HomeBanc was capitalized with $45 million in a public offering that attracted 150 subscribers.

HomeBanc now has reached at least $250 million in assets, growing 50% in the past year, and has five other retail offices around Florida — three in Tampa, near the Interstate 275/Dale Mabry Highway interchange, in Westchase and at Rocky Point; and one each in Lakewood Ranch and Lake Mary (near Orlando). Seven other loan production offices are located in Tampa, Brandon, Belleair Bluffs, Lakeland, Lake Mary, Lakeland, Gainesville and Bonita Springs.

‘Hybrid’ banking
The FDIC-member “hybrid” bank, as Campbell calls it, deals primarily in residential mortgages and business-to-business bank accounts, specializing in both Small Business Administration and Federal Housing Administration loans. The bank, which assigns officers to customers instead of having teller windows, turned its first profit in this year’s first quarter, posting net income of $167,000 following a loss of $1.4 million a year earlier.

“We think we’re making good progress,” says Campbell, who looks to build HomeBanc into a $500 million institution and eventually surpass $1 billion. “We like to take things in stride.”

All this is happening despite what Campbell terms as the worst banking crisis in his 45-year career. Florida has been hit hardest, with 14 bank failures last year and almost as many through the first half of this year, largely caused by the real estate bust.

“This is, in my mind, the worst of times,” he says. “We may lose some more good banks in Florida before this is done.”

However, HomeBanc avoided making any of the types of bad loans that are presently bogging down other banks’ books, particularly commercial real estate loans, Campbell says. He sees good current value in Florida’s housing market, noting that HomeBanc expects to make at least $30 million in home loans this month alone.

The bank is well protected against further surprises in Florida’s housing market with a total risk-based capital ratio of just above 29%, which is triple the minimum sought by banking regulators.

“Those banks with capital can sustain themselves,” Campbell says, while those whose standing has eroded because of loan losses are now facing greater regulatory scrutiny.

Recycled name, offices
Sustainability may be a bit of a hallmark for HomeBanc, whose brand was recycled from a bankrupt Atlanta-based residential mortgage firm that built a strong presence in the Tampa Bay market during the past decade. Campbell secured rights to use the name, though the bank’s current logo is distinctively different from the original.

Also, HomeBanc was able to take up prime office space for its headquarters in downtown Tampa, on the 41st floor of Bank of America Plaza, after the law firm that previously occupied it merged with another in the building. The bank signed a direct long-term lease on the space, which is just downstairs from the top-floor Tampa Club in one of the city’s tallest towers.

Now with 150 employees, including 20 at its administrative offices, Campbell says HomeBanc is able to focus more on its internal operations, retaining good employees as well as customers. The company has a 10-point values statement aimed at making it a “great place” to work and bank, he says.

“It helps as a point of equilibrium in making decisions,” he says, which may include the bank’s next potential acquisition. “We think we have the capital and the management to do that.”

HomeBanc also reaches out to business customers by offering them the chance to meet past and current sports stars.

It has professional golfer and Seminole resident Brittany Lincicome as its current spokeswoman. This past spring it hosted a private reception featuring retired Super Bowl quarterback Len Dawson.

Having maintained a residence in Clearwater for the last 25 years, Campbell says he has enough familiarity with the Florida’s banking industry to know that it is still has a strong foundation for building a solid statewide franchise.

“We can’t think of a better place to be in the country than Florida,” he says. “I think it will come back fine.”

HomeBanc’s 10 values
Homebanc created a list of 10 values for its employees and customers.

• Surround yourself with good people and good things will happen.

• Recruit and retain talented and top-performing team planers and ensure they receive the training necessary to help them succeed.

• Create a workplace of high energy, resourcefulness and positive attitudes that also promote fun and pride.

• Establish a strong sense of entrepreneurship and motivation through recognition programs and pay-for-performance compensation that reward outstanding results.

• Embrace accountability and set indicators for success for tracking progress and measuring results.

• Seek to perform at a consistently high degree of excellence, and continue to find ways to develop and improve knowledge and skills needed for future success, including the sharing of best practices.

• Build strong relationships with customers by providing them with “wow” service, determining their needs by listening, assessing how to meet those needs and following through with superb service.

“We can’t think of a better place to be in the country than Florida,” he says. And Follow the Golden Rule, treating people as you would like to be treated?

Gee Jerry wish you would have saved that Golden Rule for your fellow Horsemen here in Michigan. Funny we can’t think of a better place to be than Pinnacle but we’re nowhere and looks like we’re going to be in that same nowhere in 2012.

The Caption underneath his picture states:

Jerry Campbell, a 45-year banking veteran, launched HomeBancorp Inc. in Tampa after having built a multibillion-dollar bank in Michigan. He still sees opportunity in Florida despite the real estate bust.

At the end of the 2010 PRC’s season he closed the doors of the track and ceased to function. Period

And Pinnacle’s Website went down soon after, yet Campbell’s HomeBanc N.A. one seems to be glowing.

Little did we know that he thought that there was no better place in the world to be was Florida. But Jack Krasula should continue his investment here? Or others should come running. Michigan isn’t the only one who stinks here.

Anybody for a delicious lunch and 9 holes of golf?

HomeBanc is proud to announce we have received U.S. Small Business Administration (SBA) approval as a lender for PLP (Preferred Lender Program) and SBAExpress loans! To see the press release announcing this approval, click here.

Looks like he handing out loans in Florida while he’s waiting for others to give him a handout here. The Horsemen funded his track solely in 2010 while he was handing out money elsewhere for other peoples dreams.

But as always in the crossfire here at our home between the state and a track owner the regular casualties. The Thoroughbred Horsemen and Women. But you know what I don’t see them storming the states capital willing to fight for themselves all that much either. They just do what they do best.

For what, your guess is as good as mine. Face reality people, Michigan isn’t the only one who f’d us. The HBPA leaves open a constant invitation for many to do exactly this to them again and again.

Let me know when you’re done waiting. Looks like Jerry is happy right where’s he at. And by the looks of things Campbell certainly doesn’t have a problem or lack of money promoting his banking business.

I only hope Pinnacle is auctioned off and bought by somebody who will keep it as a race track, finish it off and promote not only the track itself but the industry like it should have been from the day PRC opened. Then I hope this state finally wakes up and comes into the 21st century and gives us what we should have gotten so long ago.

My God, the horsemen are fools. When will they awaken to fight for themselves?