Wild Wednesday ~ An East Coast Earthquake… Well Why Not?

We’ve had everything else this year.

From the blizzards that blanketed N.Y. through the Midwest from Jan. & Feb. to a record number of Tornado’s with massive flooding everywhere through spring and summer that have kept not only our Detroit DTE workers busy with constant storm outages but our neighboring states as well.

So why not a Shake, Rattle & Roll Earthquake?

I couldn’t help laughing when I read this in one AP article on the Internet not in the sense that the event itself was funny but some of the people’s panicked descriptions.

Adrian Ollivierre, an accountant who was in his office on the 60th floor when the shaking began, said: “I thought I was having maybe a heart attack, and I saw everybody running. I think what it is, is the paranoia that happens from 9/11, and that’s why I’m still out here — because, I’m sorry, I’m not playing with my life.”

On Wall Street, the floor of the New York Stock Exchange did not shake, officials said, but the Dow Jones industrial average sank 60 points soon after the quake struck.

Well shit would they of known had it shook after what has taking place on that floor in the last 3 weeks? They are used to it.

Those people live in a constant state of confusion.

In reality from N.Y. to Illinois and from Toronto to K.Y. people felt the unusual. First Quake since WWII to hit a 5.9 on the East Coast.

Joking aside I’m glad nobody died or got seriously hurt in this.

Just before 2 p.m. today, I was in my car at an ATM machine and I felt my car shake. I’d never felt that sort of sensation before and was upset, because it’s a new car and I was worried that something was wrong with the engine. I even looked at the dashboard to see if the engine had a warning signal that it might be overheating. It lasted less than a minute – maybe 30 seconds – and then it stopped.

While my boss was on an important call the phone cut out. When he called back the person on the other line, near Washington, D.C., had informed us that there had just been an earthquake. Not even 60 seconds later as I was sitting at my desk, I started to feel very dizzy and queasy, like I might faint, when I looked over to see the juice in my clear cup swaying quite significantly back and forth. I turned to my coworkers and asked if they felt what it was, and sure enough we all thought we were crazy.

I thought my son Ryan was rolling the barbecue grill around the back porch for some reason. But then it increased and I thought, “WHAT is that young man DOING?!?” Next, small glass objects in a cabinet started to rattle and I thought “Could this ACTUALLY be an earthquake?” Then my son ran into the room and I KNEW it wasn’t him. 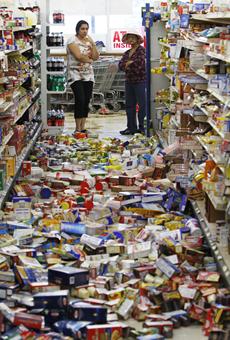 Well calm down people because this was just a warm up for IRENE!

The start of the 2011 Hurricane Season is here and I have a feeling we’re in for a more than bumpy ride. So hang on to your neighbors……. 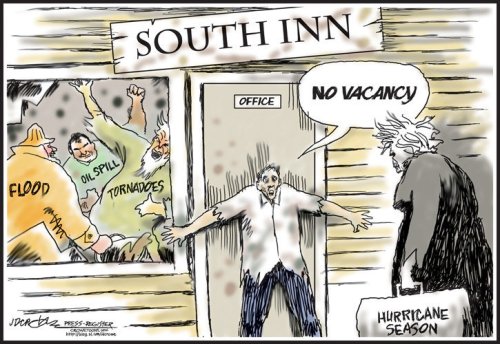 Have a Wonderful Day.