We were tougher, unspoiled ( unless you wanted your ass kicked by your parents ), more mature and willing to take to the streets and fight for what we believed in. Even if we got our heads kicked in.

In 1968 two of our hero’s were murdered before the nations eyes. Bobby Kennedy & Martin Luther King Jr.

The 68′ Tet offensive threw Nam into another realm as if it hadn’t been disastrous enough. No doubt in any body’s minds that RFK would have been our next President had he not been assassinated.

And Nam would have ended soon after. But as the words goes it just wasn’t meant to be. And I still say why the hell not.

Another story for another blog.

Also in 68′ the Chicago police decided to beat everything that they came across whether people were causing any trouble or not. Even CBS reporter Dan Rather got his ass kicked in and questioned why THEY not the protesters had brought it to this level.

The only band that had the balls to show up at the 1968 Democratic Convention demonstration was Detroit’s MC5. They kicked out the Jams and the cops kicked in everyone else. Whether in or out of their path. There was one blood bath going on in Nam and the other on the streets of America and from it, not one damn thing was solved.

More young men were being drafted into hell. The poor fought it or went to Canada. The rich escaped the war by hiding into the other dodging place called “College”. Nothing was fair but we forged on with the fight.

In 1969 a starry-eyed hippie had a thought and a vision. To create a three-day art fair and concert festival, a small gathering of sorts. Long story short as my generation lived it so we already know the story, a venue had been chosen and a great man unprejudiced by long hair or color welcomed the group upon his farm.

So between promoter Michael Lang and John Roberts, Joel Rosenman, Artie Kornfeld with the financial backing from Roberts and Rosenman and dairly farmer Max Yasgur. Bethel, New York became one of the biggest concerts in history. 500,000 came together and through 4 days like Yasgur had said in addressing the crowd:

“That a half million young people can get together and have three days of fun and music and have nothing but fun and music, and I God Bless You for it”!

And God Bless Max Yasgur’s soul for having them.

You think the kids of today would sit in the mud or fight for anything?

It was our generation when there was time to fight and then a time to come together in peace.

And that my friends was the WOODSTOCK GENERATION.

And it was purely mystical and totally unforgettable. A memory to savor and cherish.

By The Time We Got To Woodstock…. We Were Half A Million Strong. 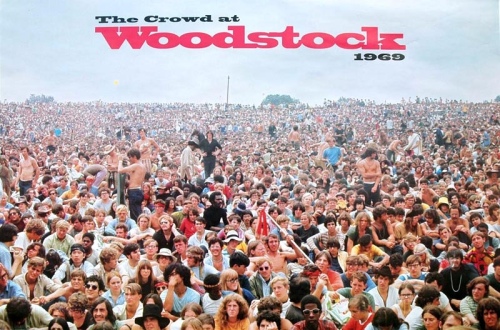