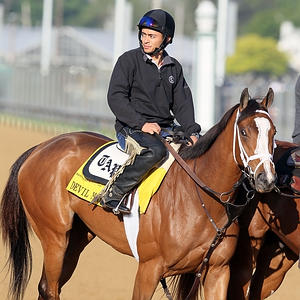 How utterly sad hearing this news. Only 4 years old.

Multiple grade I winner Devil May Care, a starter in the 2010 Kentucky Derby (gr. I), was euthanized May 4 after a confirmed diagnosis of lymphosarcoma, a form of cancer.

Her dire condition was confirmed by veterinarian Johanna Reimer, a specialist in internal medicine and cardiology at Rood and Riddle in Lexington.

Purchased for $110,000 by John Greathouse at the 2008 Keeneland September yearling sale, Devil May Care was trained by Todd Pletcher.

According to Greathouse’s Glencrest Farm, which raced the filly in all nine of her starts, she will be cremated following a complete autopsy. Devil May Care was bred in Kentucky by Diamond A Racing Corporation.

Devil May Care had been a hopeful for last year’s Breeders’ Cup Ladies’ Classic (gr. I) at Churchill Downs, but her diagnosis with a non-contagious form of hepatitis last October forced her to skip the race. Since then, she had been on and off antibiotics and continued to carry an elevated liver enzyme count.

Greathouse said the filly had been hospitalized in Florida over the winter, where her condition had been monitored by veterinarians. The filly, who had also been treated for an inflamed bowel, was brought back to Glencrest this spring when she showed some slight improvements.

“When she got here, she looked good,” said Greathouse, who added Devil May Care was on steroid medications he believed had kept the cancer at bay. Although she did put on some weight while in Kentucky the last few months, her coat began to deteriorate, and veterinarians at Rood and Riddle did more tests on the filly that ultimately detected the cancer.

“We went through a lot to keep her alive, and we were willing to walk that road with her, but it was a battle she was never going to win,” said an emotional Greathouse, who expressed his deep respect for the filly.

Greathouse attached the following letter for Devil May Care’s fans and supporters:

The Devil May Care Family:

To all who have followed and been a part of Devil May Care’s racing life and her fight for life, she and I wish to thank and applaud all of you. The racing was a thrill and one not to be forgotten or dismissed out of hand. To this day I don’t believe we ever saw her best race. But that is my opinion and will be saved for my memories.

To those who cared for her and her health, we both thank you from the bottom of our hearts.

We tried very hard, only to be overcome by lymphosarcoma, an enemy that we couldn’t beat.

We entered a race we couldn’t win.

In an ironic twist, a year ago today she was busy drawing post position 11 for the 136th Kentucky Derby.

She was our shining star…
John Greathouse

Every single individual who contains passion for these horses, please know many are hurting along with you after hearing this very sad news. She may have entered a race here she couldn’t win. But she entered an even better place and has won.

She is now in the best Winners Circle of all.