GOP ‘Path to Prosperity’: Cut the throats of Seniors but leave the Rich alone. Want Giant Cuts? Let’s Start With Their Salaries & Their Benefits! 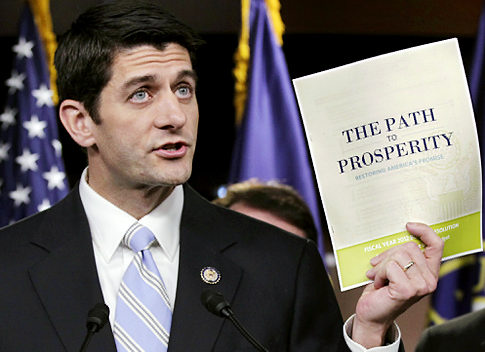 CBS/AP) Medicare and Medicaid are on the chopping block in the budget plan put forward today by Republicans in Congress.

Rep. Paul Ryan (R-WI), chairman of the House Budget Committee, said the plan for next year’s budget would cut spending and restructure the government-funded health care programs for the elderly and the poor.

“This is the path to prosperity,” Ryan said. “This is the budget that we are putting forward today. This represents our choice for our country’s future, and it’s our commitment to the American people.”
Continued…..

Rep. Steve Israel, D-N.Y. stated “Everyone agrees we must cut spending and tighten our belt, but House Republicans have chosen to do so on the backs of America’s seniors, not the oil companies making record profits and getting tens of billions in taxpayer subsidies,”  “Forcing seniors to pay higher health costs is not the right way to balance our books and it’s not the only way to do it.”

Congress: Leadership Members’ Salary (2011)
Leaders of the House and Senate are paid a higher salary than rank-and-file members.

So if they get a pimple on their asses and go to the E.R. YOU PICK UP THE TAB.

How many get admitted for observation because they are dizzy, have a headache, chest pains, can’t take a dump?

If you were dying but your vitals for one moment said decent YOU WOULD BE DISCHARGED IMMEDIATELY! Before the another set of vitals could even be taken that may indicate impending death around the corner. Then you would go home and die just like my uncle did in 2000.

The Republicans want massive cuts to Medicare, but cry they are living on hard times with $174,000 salaries.  The GOP wanted this video GONE!

So they want Massive Cuts, I say let’s start with their salaries and their benefits first that are paid for 100% by the Tax Payers. End the Bush Tax Cuts for the Rich.

Republicans want to end Medicare but leave tax cuts for the richest of Americans. Privatizing of Health Care for Seniors? Yes right into the hands of the Insurance companies already enriched with wealth.

The Seniors that were duped into voting for all this obviously never saw it coming.

They wanted the Democrats out. As the saying goes “Be careful what you wish for, you may receive it”

Well here are your Republicans Senior Citizens. How do you like them now?

Well this man came out of the hospital after having brain surgery from terminal cancer and forged onto the Senate floor so that Medicare wouldn’t be touched. Well the seniors who are Republicans might have hated him but he was there so this sort of thing would not to happen. It’s a shame he’s no longer here to fight for you now.

WASHINGTON — Senator Edward M. Kennedy returned to the Senate on Wednesday for the first time since being sidelined with cancer and was greeted by a bipartisan barrage of whoops, cheers and applause before savoring a legislative triumph.

Senator Edward M. Kennedy, with his niece, Caroline Kennedy, entered the Capitol on Wednesday for the first time since his brain surgery.

The starchy formality of the Senate floor dissolved as Mr. Kennedy, the chairman of the Health, Education, Labor and Pensions Committee, arrived to cast his vote on an important Medicare bill. The senator’s presence was considered crucial, since 60 votes were required to advance the measure.

“Aye,” Mr. Kennedy said, flashing a thumbs-up when the clerk called his name. He was one of 69 senators to vote in favor, meaning that the bill has now a veto-proof majority in both Houses.

“I return to the Senate today to keep a promise to our senior citizens,” Mr. Kennedy said in a statement released by his office, “and that’s to protect Medicare. Win, lose or draw, I wasn’t going to take the chance that my vote could make the difference.”

The bill would block a 10 percent cut in Medicare payments to doctors because of a statutory formula that reduces payments to doctors when spending would otherwise exceed certain goals. The 69 “yes” votes were 9 more than required to invoke cloture, and under a previous agreement the measure was considered to be approved after clearing that procedural hurdle. The measure had stalled on June 26, falling just short of the 60 threshold.

Mr. Kennedy did not vote on June 26, and how much his dramatic appearance on Wednesday helped to sway sentiment may be debatable. What was certain, though, was that enough Republicans voted “yes” to send the bill through.

Mr. Kennedy’s appearance in the chamber was his first since May, when he was found to be suffering from a brain tumor. Minutes before the vote he was seen walking into the Capitol with his smiling wife, Victoria, by his side. He was escorted into the Senate by Senator Barack Obama, the presumptive Democratic presidential nominee, and Senator John Kerry of Massachusetts, and by his son, Representative Patrick Kennedy of Rhode Island.

Democratic lawmakers had apparently been tipped off and applauded almost as one when Mr. Kennedy, white-maned at 76, appeared. Their applause was quickly augmented by Republicans, many of whom generally oppose the senator on the issues but have come to respect the legislative skills he has honed in nearly 46 years on Capitol Hill.

One Republican, Senator Kay Bailey Hutchison of Texas, complained that Democrats were trying to ram the Medicare bill through without allowing proper consideration of amendments. But before voicing her complaint, she said she was “thrilled” to see Mr. Kennedy back in the Senate. And she voted in favor of the bill.

The momentary triumph of personal affection over political consideration was evident when Senator Mitch McConnell of Kentucky, the Republican minority leader, flashed a big smile at Mr. Kennedy, and another Republican, Charles E. Grassley of Iowa, shook Mr. Kennedy’s hand. Both Republicans voted against the bill.

President Bush has threatened to veto the bill, in part because it would reduce payments to private Medicare Advantage plans offered by insurers like Humana, UnitedHealth and Blue Cross and Blue Shield companies.

If the president does cast a veto, it would be overridden if the Senate voted again as it did on Wednesday. The bill passed in the House by an overwhelming 355 to 59.

Before Mr. Kennedy appeared on Wednesday afternoon, Senator Harry Reid of Nevada, the Democratic majority leader, said: “I look across the aisle at my Republican friends. The 60th vote is there.”

And then some. Eighteen Republicans voted “yes,” as did all 49 of the Senate’s Democrats and the chambers two independents, Joseph I. Lieberman of Connecticut and Bernard Sanders of Vermont.

Afterward, Mr. Reid heaped tribute on Mr. Kennedy. “Senator Kennedy showed again today why he is so beloved in our Senate family, why he is the model of public service and an American icon,” Mr. Reid said. “We knew that Senator Kennedy — one of the greatest fighters this body has ever seen — would rise to the challenge and return to work, and what more appropriate time for him to do so than in an effort to protect seniors’ and veterans’ health care.”

One man stands and cries how $174,000 is a hardship to exist on. And another man who was dying stood on the floor of the Senate and casted his vote to protect you.

If only he was still here to fight for you. Fight for all of us.