The Legacy of Ted Kennedy will continue.

Was that all there really was to Ted Kennedy?

It always amazes me the people that call themselves Born Again Christians, the hollier than though crowd. Proclaim where they think somebody else’s soul will go. My suggestion for you, is you had better concentrate on where your own soul is going rather than the people you think YOU have the right to judge. You are all so Christian that you forget, that the God you so call worship is the ONLY one who owns the patent on JUDGMENT. And those that are trying to portray God are the true sinners.

It’s too bad the people calling themselves Christians, still haven’t learned about forgiveness. That’s how much they really know the Jesus they proclaim to worship.

I wonder what all these saved people behaved like before they got saved? Seems those who have spoke about Ted Kennedy over the last week and what kind of man he became, was a man who did his best to right any wrongs he may of known he did.

But for the blind ignorance that still comes from some minds & mouths. I feel sorry for all. It just shows how shallow and and how little substance they have for any subject matter.

This is a man who on July 9, 2008, after having surgery for a brain tumor from terminal cancer, returned to the Senate floor so he could cast his vote that Medicare wouldn’t be touched.

“I return to the Senate today to keep a promise to our senior citizens – and that’s to protect Medicare. Win, lose or draw, I wanted to be here. I wasn’t going to take the chance that my vote could make the difference.

Medicare should not be a partisan issue. Illness and age know no party boundaries. The 44 million Americans who rely on Medicare to meet their health care needs are both Democrats and Republicans. Like all Americans, they have worked hard all their lives. They’ve raised their families. They’ve built our towns and cities and farmed the land. They’ve served in our military.

Kennedy’s dramatic return gave Democrats the impetus they needed to free Medicare legislation from gridlock. It had received 59 votes on an earlier test, one short of the 60 needed to advance. Kennedy made 60, and when Republicans saw the outcome was sealed, several of them joined Democrats to pad the margin. The House already has overwhelmingly approved the measure.

And this is a man who buried three brothers before him, two tragically through no more than slaughter.

Became a surrogate father to all of both those brothers children. Had to bury four nephews. Had to Identify the body of John Jr.

Lived through a nightmare yet withstood his own young son’s cancer that cost him a leg. Endured one family tragedy after another after another.

Did he have his own demons? Of course
Could you blame him?

Yet throughout the good this man has done in his 48 years in the Senate. Helped literally millions of people. Lives of people who would be dead if not for Kennedy’s fights. Personal calls he took and responded to with action from the citizens of not only his own state, but throughout all states.

But for some dense and brainless individuals, all they can still say is the same one thing. Mary Jo Kopeckne and an accident that took place 40 years ago.

So let’s talk about her. How old was this grown woman? Surely old enough to make an educated decision of whether she should of even had gotten into a vehicle with an individual she knew was too intoxicated to drive. Where was she going with this man and to do what with him back at his cottage? Now having stated facts here, did she deserve to die for her own bad decisions? Of course not.

But did Ted Kennedy awaken that particular day and say to himself, today I’m going to go out and have an accident where somebody will end up dead. Of course not.

But because of those actions, Ted Kennedy being haunted by many things did in fact become a different man. A man now more determined than ever that fought even harder to help those who did not have the kind of money and power that his own family did. And yes like all rich families that had money and power, it got a lot of Kennedy’s out of troubles that you or I would of went to jail for. But is that not true with all people that are rich? And this is what really gnawed at the Republicans about the Kennedy’s. In fact that’s why many loathed the Kennedy’s. That this very wealthy family were Democrats in the first place. They hated the thought that a family of such wealth should care so much about the poorest of people. They couldn’t comprehend or fathom such a thing. But then,

THAT IS THE DIFFERENCE BETWEEN THE DEMOCRATS AND THE REPUBLICANS. THE DEMOCRATS CARE ABOUT OTHER PEOPLE, OUTSIDE THEIR OWN REALM OF WEALTH.

This is an honest to God reality.

And if the ones who are the biggest critics of that 1969 accident yet call their own selves Christians, but yet feel they have the right to judge. I’d say your the one who is going to hell. God doesn’t like people portraying him. What ever imperfections Ted Kennedy had, he did his very best to atone for the mistakes he had made. And it will be God’s job to judge him as God will judge us all.

So I ask again. Was this all there was to Ted Kennedy?

SO SAY WHAT YOU WILL ABOUT THIS MAN.

SENATOR EDWARD KENNEDY FOUGHT FOR PEOPLE WHO HE FELT DESERVED THE FIGHT, ALL OF HIS DAYS AS A SENATOR.

THE POOR, THE SENIORS, THE CHILDREN, THE HARD WORKING MIDDLE CLASS.

WE NEEDED THIS MANS FIGHT. AND I FOR ONE WILL MISS THIS MAN.

And it’s funny the first political cartoon I came across, explicitly expressed my very first thought when the news broke of his death. WHO IS GOING TO FIGHT FOR US NOW?

And what a fight he had to the very end. At the DNC convention you could see his hand shaking, yet gave a speech with the same strength and vigor as he could muster up. That was Ted Kennedy’s determination. No matter how sick, no matter how physically weak. It was that strength that gave so much hope to others.

Ted is now reunited with his brothers and the rest of his family that went before him.

Thank you for your service Senator. For all those you fought for. Even though coming from a very rich family you didn’t have to care, yet did. Your fight for us will be missed. Your kindness of others. Your caring of others.

You will be a very missed man by all. Family, friends, & foes. There is no doubt in my mind that some of those Republicans that you fought against for so many years, had more undying respect for you than they did for Bush or Cheney. Because of the loyal and compassionate friend you were to so many.

May your 48 year hard fought dream of health care for all come to pass Ted.

Your smile will be seen from Heaven when it does.

THE FIGHT GOES ON. 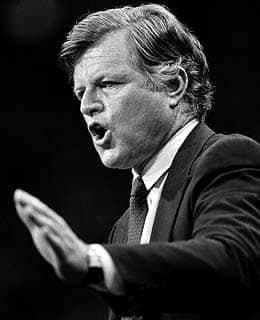 One response to “The Legacy of Ted Kennedy will continue.”